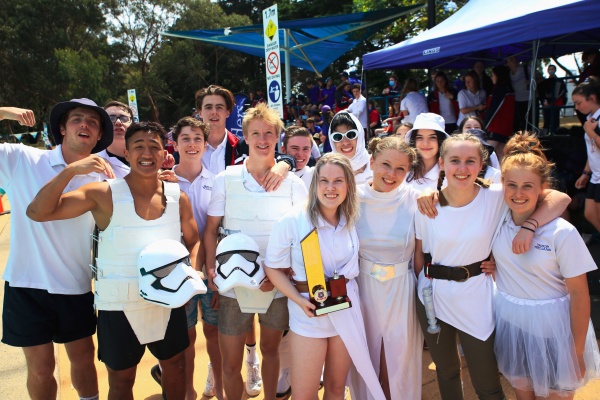 The House Swimming Carnival was held at the Croydon Memorial Outdoor Swimming Pool on Wednesday 24 February. We were blessed with perfect weather and there was a great atmosphere with Houses competing in and outside the pool for top honours.

Tabor Trojans (White House) were victorious in claiming the House Swimming trophy after coming second to Gibeon Warriors (Red House) last year! Gibeon Warriors did not give up the battle entirely and succeeded to walk away with the House Spirit trophy for 2021.

It was a close battle between the three Houses with Tabor Trojans placing first with a total of 1,124 points. Coming second place was Zion Crusaders (Blue House) with 1062 points followed by Gibeon Warriors with 950 points. Congratulations to all the House Captains for an outstanding effort.

All three Houses were well represented in the pool with great performances in all age groups, including seven new records broken in the pool this year.

The Carnival concluded with a novelty event by our House Captains and Vice Captains, finishing off the day in great spirit.