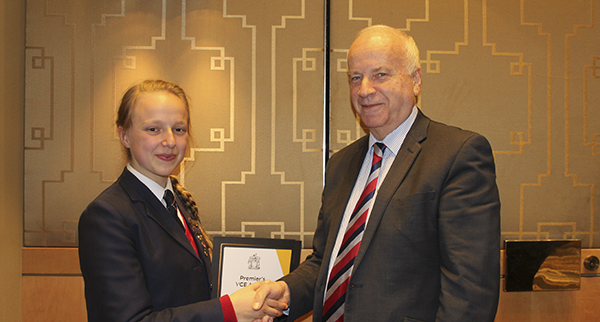 The annual Premier’s VCE Awards were presented on Thursday 27 April 2017. Among them was Grace Spratt from Oxley who received an award for academic excellence in the study of Texts and Traditions.

The Premier’s VCE Awards acknowledges top performing students for their outstanding academic achievements in the Victorian Certificate of Education. Based on the 2016 student study scores, some 287 students across Victoria received awards. This is less than 0.05% of the cohort who completed the VCE last year.

College Principal Dr Douglas Peck was in attendance at the Awards Presentation and remarked, “It was a pleasure to congratulate Grace on this wonderful achievement last Thursday in the city, where the Minister for Education presented these annual awards.”

The wider Oxley community would also like to add their congratulations to Grace on receiving this prestigious award.